I am not going to do it the Arduino Way

I have an Arduino!

Why did i say that? I think it is Because i love and hate having one.
I love having one as it is simple to get anything working with an arduino.
Someone has done it and the code is on the internet and you just have to find it.

I hate it for that same reason.

Arduino has opened up the electronics hobby a lot  just buy a few sensors , download some code, and BOOM you have a new project.

But this is to me not good for the person who wants to get further into the hobby.
Someone has done all the hard work for you, reading datasheets,writing the interface library, and some already have the sensors wired up and ready to go so that all the new Arduino user has to do is download the examples and combine them to to what they want to do.

I personally want to know how it all works that is why i have chosen PIC microcontrollers to do my projects with. I do have and arduino but 99% of the time i just use it to make sure some piece of hardware works before i try to create libraries for the PIC.

I may be trying it the hard way, but the one who takes the shortest path  to learning ends up just going to forums and asking someone to do it for them , instead of taking time to learn how things work.

So from now on i am not going to do things the Arduino way i am going to learn how all Integrated circuits interface and write my own PIC libraries for the sensors i have on hand. Now off to learn SPI.
Posted by Ostamo at 2:14 PM No comments:

Thia is my first time soldering these small SMD components, ash shown in these picture i need more practice.
This image is of a button breakout with SMD resistors and while it does not look great it works very well. 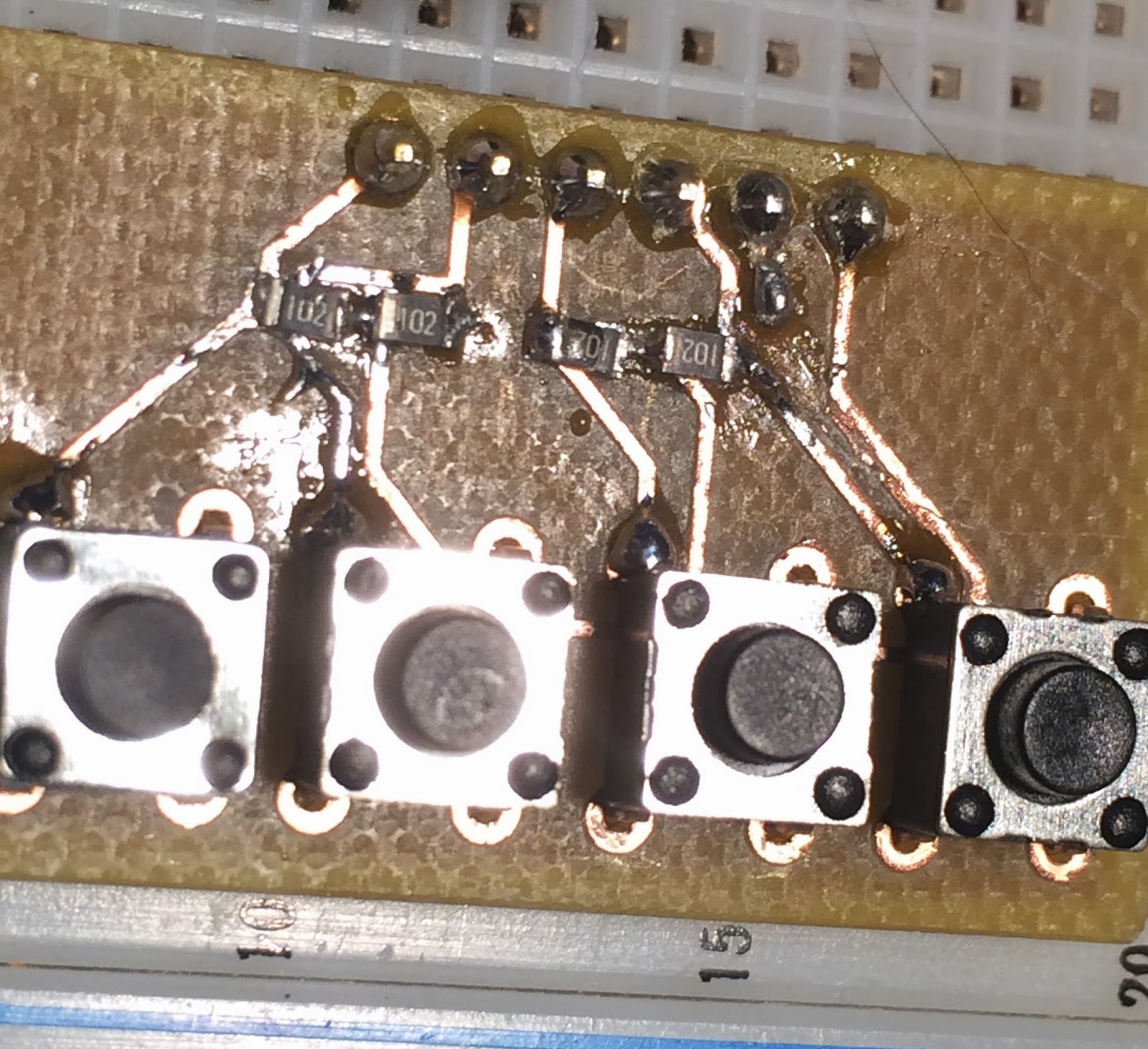 This final Image is of an Microchip 7940N RTC breakout board that i put together, i only ruined one 7940N IC getting it to work i may also need to add capacitors to the crystal as well on the next board revision.

Posted by Ostamo at 2:45 PM No comments:

learning to use my new FPGA DevBoard

So i received and Altera UP3 devboard kit from someone who was not using it anymore.
They did not supply a Programmer for the device itself.
This is what it looks like 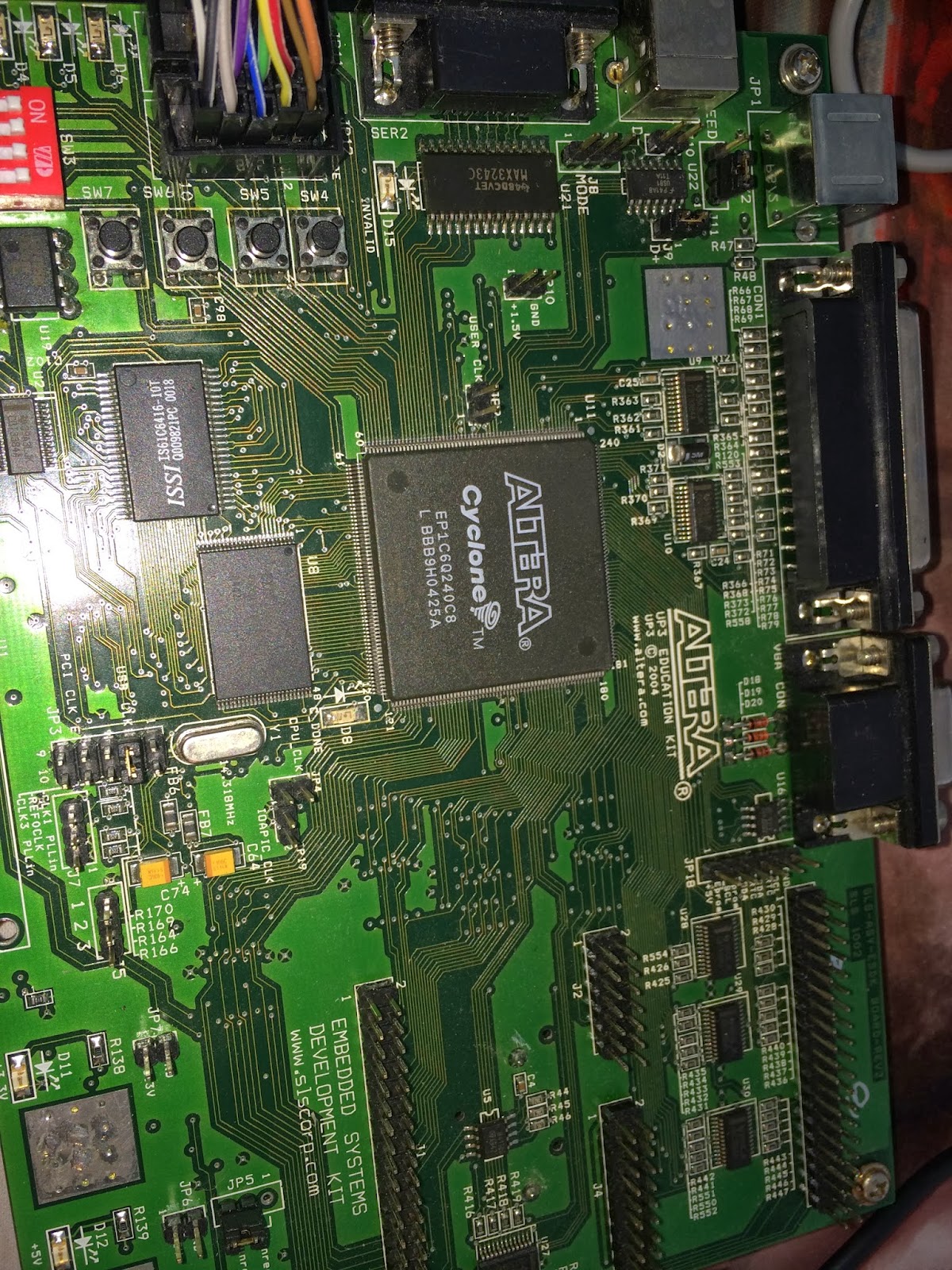 It also has lots of features LCD,output,buttons, LEDs,VGA ,serial and parallel outputs.

So wanting to be able t o play with it to see if it works i went looking for a way to program it and stumbled upon this website to make a USB-Blaster.  http://sa89a.net/mp.cgi/ele/ub.htm

i prototyped the circuit on my breadboard and successfully programmed my UP3 devboard with a simple project. and installed it using the Altera drivers for the bus blaster and it can be used from the Quartus software. 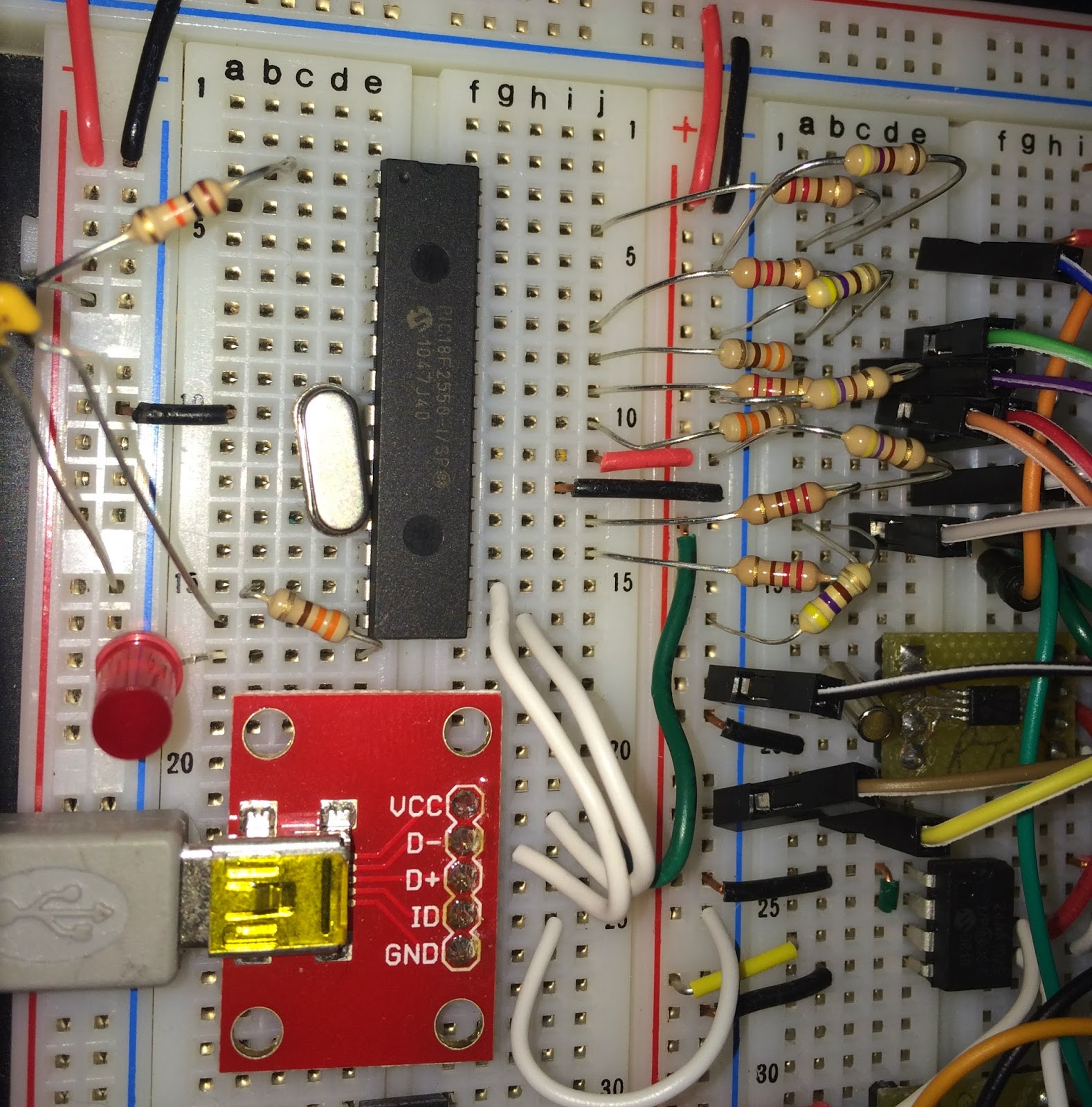 This prototype worked well but since it only does JTAG programming and not Jtag (AS) Active Serial programming ,the program itself will not stay on the devboard permanently so i may need to buy a real programmer for this board. I also may need to get a small board made or wire it up on a protoboard until i get a chance to get a better programmer.

I was thinking that i should probably start logging what projects i do on a weekly or daily basis.
Also write down if i research something such as FPGA tutorials and making boards through school.
Hopefully i can write down all my ideas and musing on this blog so i can see what i think of through out the day.
I will see how it goes it may just fall by the wayside again
Posted by Ostamo at 8:16 PM No comments:

I have completed all the VTMS as far as i can go, now it is time to read other books and develop my own games.I will post my progress as much as i ca, but learning game development can take time.
Posted by Ostamo at 6:17 PM No comments:

SO i am not the best at keeping this blog updates, but i have been busy.

so far i am done with Disc 1 of the Opengl VTMS
.
I have enjoyed going through them again as i had forgotten some of the concepts that i learned the first time .
So now i am going to start on Disc 2 of the VTMS as they teach shadows, and shaders, and how to load FBX files as well.

Email ThisBlogThis!Share to TwitterShare to FacebookShare to Pinterest
Labels: Electronics

So far i have made it to the particle engine VTMS and i hope to get through some of them tonight.
so i am on video 25/48 on CD 1 of the openglVTMS.
Posted by Ostamo at 4:01 PM No comments: